Trends and Changes in the Banking Industry

Renewable Energy Jobs Wiped out in US by Coronavirus

The use and development of renewable energy is the topic of many businesses, governments, and organisations.

Although renewable and green energy is on the rise there is still a big challenge to overcome. That is, how is consistent power provided during periods of less wind and sun?

The journal “Energy” published a paper that outlines a simple plan to use existing mountain regions, disused mine shafts and canyons to generate electricity. The process is called Mountain Gravity Energy Storage (MEGS) which essentially is a plan to use a crane to take sand from the bottom of a site to the top and so on creating potential energy via gravity.

This is not the first use of gravity to create electricity, a well-known example is hydropower plants that harness the energy produced via falling water. It uses excess energy to pump water back up into a reservoir so that it can fall again. When full the reservoir is charged like a battery. However, to expand on this type of energy it requires a dam and reservoirs to be created which are costly.

However, in the case of MEGS, all you need is a cheap heavy material that you can slide down a mountain and raise back up again.

Co-author of the study, Julian Hunt stated that MEGS is not designed to replace any existing forms of energy creation rather it is a way to add to them. Hunt commented:

One of the benefits of this system is that sand is cheap and, unlike water, it does not evaporate — so you never lose potential energy and it can be reused innumerable times. This makes it particularly interesting for dry regions

The published paper depicted the design: 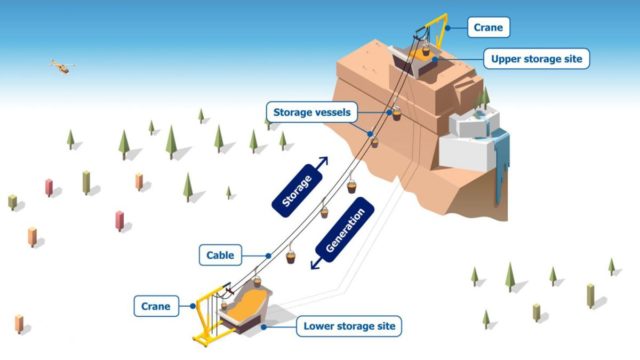 The picture shows ski lift style cables that carry large amounts of sand up and down the mountain. Energy generated would depend on the amount of sand and the height of the mountain with the authors behind the paper predicting it could produce enough energy for anywhere between 5 and 555 days.

Although simply designed and cost-effective the authors of the paper note that this is not the most effective way to create and store energy but that it is a step between short term energy storage and long term. Isolated regions such as Hawaii, Cape Verde, Madeira, and the Pacific Islands with steep mountainous terrain may particularly benefit from this kind of mid-level energy storage.

Steven Zenios is a young author and designer with strong passion. A specialist in web design and development, blogger, author and Blockchain entrepreneur. He is the CEO of Web Theoria, a digital agency based in Cyprus. In the last 10 years, he has vastly improved his knowledge and skills to produce great pieces of work, both in the web design industry and article/blog industry. Contact Steven at +357-22029786 ext: 6120 or by email at [email protected] for editorial related questions.

previousImpact of Juncker Plan on Jobs and Growth in the EU